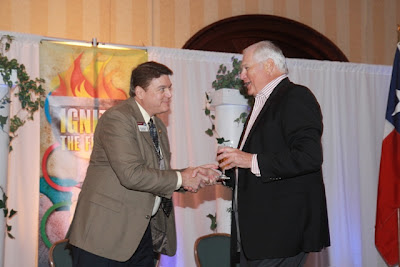 Convictions and communications skills: Hansen earned the Peabody Award for Distinguished Journalism for sticking to his story about payments to Southern Methodist University football players — despite death threats. The story led to the death penalty for SMU in 1987. Hansen has a flair for cutting down to size the haughty and foolish. Frequent targets are Dallas Cowboys owner Jerry Jones and Mavericks owner Mark Cuban. (Jones was the focus of several amusing stories during Hansen’s speech). When speaking on television, Hansen often uses his “unplugged” format to indicate when he’s sharing his opinions. In doing so, he shows sensitivity to the blurry but important line separating opinion from reporting. His comments for D25 were colorful and more typical of his “unplugged” segments. 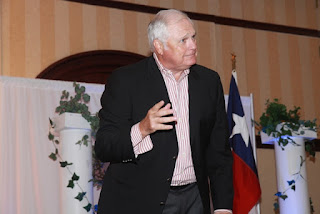 Compassion: Hansen has raised thousands of dollars for students and schools through golf tournaments and his scholar-athlete of the week program. His “Thank God for Kids” segment has aired at Christmas-time since 1983. In it, he tells a story of a child’s death or misfortune in the past year before playing a video of kids in Dallas, set to an Oak Ridge Boys song, which ends with images of a young Dale and his kids. In last year’s Thank God for Kids, Dale mentioned the Penn State University sex scandal and said sexual abuse victims “stay hidden in darkness,” a reminder of the shame they feel, but shouldn’t. We don’t cheer for sexual assault victims, he said, like we do cancer victims wearing ribbons. Yet we all know a sexual assault victim because we know Dale. With great courage, he related an incident in Iowa 53 years ago. 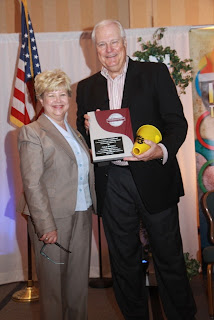 At the D25 Awards Luncheon, Hansen praised Toastmasters International for helping nurture confidence, communications and leadership skills among its members. In his conclusion, he said he may be known for being a sharp-tongued critic of local sports luminaries, but he’s most proud of having a daughter who teaches inner-city kids. Father and daughter talk daily. Thank God for kids indeed.

Be Our Guest – Workshop Recap