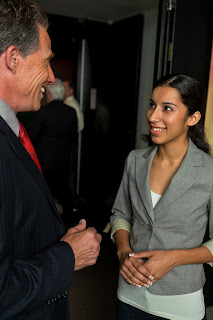 September 12th and 19th were important days for District 25 and our brand. Assisted by the members of the Toastmasters clubs at TCU as well as UTA, D25 members conducted a “Talk Up Toastmasters” event for nearly six hours at recent job fairs!

The District Leadership would like to thank those who made it all possible:

What is “Talk Up” Toastmasters? Simply stated, one “pitches” Toastmasters to the attendees who are passing by. Considering the environment of a job fair, it was an easy task to demonstrate to job seekers how improved communication and leadership skills could make all the difference in order to “stand out” on a resume, or even at one’s current job. What was the best part of all of this? Not a timing light in sight…finally there’s a place where one can talk without penalty!

The numbers were equally astounding. At TCU, 71 folks stopped by to complete information lead forms. Fifty-six did the same at UTA. Considering the very economical price we had to pay to register for each of the fairs, this is nothing short of a resounding success. I will continue to keep in touch with representatives from each club in order to track additional information (e.g. how many showed up at Open House, how many joined, etc.).

Based on the feedback and numbers, D25 is considering representing Toastmasters at additional job fairs in the spring of 2013. It is an amazing opportunity to connect with both Toastmasters as well as aspiring ones. I look forward to these future encounters.