First Timer Discovers That There’s So Much More to Toastmasters 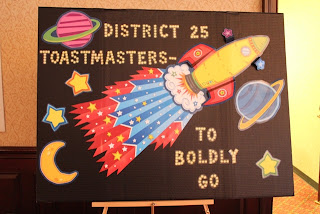 My name is Kathy Bergs and although this is my sixth Toastmasters Conference, it was my first time going as an actual Toastmaster. In the past I always accompanied my husband John Bergs.

From the moment I checked in at the registration and first timer desks, I knew it was going to be a fun Conference. At the first timers desk I was greeted by the first timer conference chair. He gave me a puzzle to fill out for a door prize and other helpful information. At 5:45pm I attended the first timer’s reception in the Hospitality Suite where the District Governor Bonne Stroman spoke to and welcomed us. Dinner followed the reception and when the doors opened to let the guests in there was an electrifying atmosphere in the ballroom. It could have been from the Conference theme “TO BOLDLY GO” or it might have been from some of the Toastmasters who dressed up as aliens, Star Trek, Star Wars and other characters. 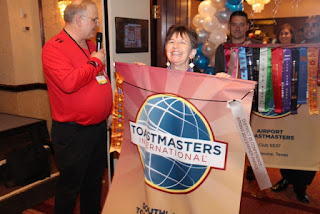 The excitement didn’t stop there; before dinner there was the banner parade. Each club in Toastmasters has a banner and an officer from the club carries it in. Each club is announced as they proceed in to the ballroom.

After dinner the keynote speaker for the evening was Wally Funk, Mercury 13 Astronaut Trainee. My description of her speech could not begin to do it or her justice. She was amazing happy, friendly smiled throughout the speech took pictures with the guests. She has logged 18,600 hours of flying time and was the nation’s first female safety investigator. She talked about her experience while training for the Mercury 13 flight and one day she actually hopes to go into space. She told about the tests she went through and how she had done better than all the men in the program. She closed by saying her next adventure will be on Richard Branson’s Spaceship Two.

The evening’s festivities ended with a costume party and there were prizes given for best male, female and alien costume. My evening didn’t end there I accompanied my husband to the Hospitality Suite for snacks and drinks.

Saturday was an early day for me; since my husband is Sergeant at Arms we were invited to sit at the head table for breakfast, which started at 7:15am. The keynote speaker for breakfast was Randy Harvey who is Toastmasters International’s 2004 World Champion of Public Speaking. His speech was “Why Settle for Greatness When You Can Be Immortal.” Again I couldn’t begin to do him justice. He talked about when he was in junior high and being a troublemaker. He told about when he was in high school and was called in to the principal’s office and when he stepped out he took a peek at his record and in it he saw that the vice principal had written that “Randy will probably become an alcoholic and drop out of high school.” He did neither one of those and has several degrees: Bachelors, Masters, PhD. He told how his mother would ask him what he was that day and he would say great. When she died he never got to tell her immortal. It was several years later that he was asked to speak at a teacher’s retirement. It turned out the teacher was the vice principal who had written in his record.

The rest of Saturday consisted of going to education sessions given by different speakers. I attended Randy Harvey’s because he impressed me so much. Then at 10:30 I attended the business meeting (this usually does not happen for a first timer). Those who are running for one of the higher offices are elected and the clubs give an annual report. It was quite interesting.

Saturday afternoon there was a lunch and the keynote speaker was Dana Bowman. He is a member of the Army’s elite parachute team the Golden Knights and the first double amputee to re-enlist in the United States Army. Dana presented a slide show showing how he lost his legs; it was during a jump and he and his buddy were supposed to pass each other in the air. That didn’t happen; his buddy collided with Dana and sheared off both his legs. From the time he was on the ground it took 18 minutes to get him to a hospital. That he didn’t die like his buddy is amazing. He talked about his abilities even being a double amputee. His speech was very uplifting.

Saturday afternoon also included the International speeches. The gentleman that won was amazing. Actually all the contestants were great.

Saturday evening consisted of the Dignitary Parade, dinner, and DTM ceremony. I have seen this ceremony before when my husband received his DTM and to this day it still gives me goose bumps. I remember talking to him later and asking him how long it will take me to get mine. The keynote speaker for Saturday night was International Director, past District Governor David McCallister. David spoke about his experiences as a Toastmaster and District Governor.

The evening for me concluded on such a high note that it was hard to fall asleep that night. I used to think like other people that Toastmasters wasn’t for me. I know how to speak to people and I am outgoing. Toastmasters is so much more than that; it is a learning of one’s self, it is seeing yourself grow in different ways, it is constructive not destructive, and much more.

After attending this week’s conference I wish I had listened to my husband and joined earlier. I urge everyone if you haven’t done so to at least attend one conference. It’s worth it.