The influence Tom Brents and Brenda Daniels have had in Toastmasters is unfathomable.

In the past thirty years, both have achieved their DTM twice. 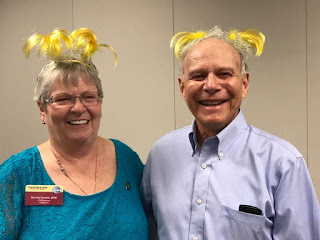 Tom has been an Afterburners member since its inception and has consistently demonstrated his leadership in volunteer service around the world.  Known as a true gentleman, Tom is a fantastic storyteller and is currently an officer in Afterburners.

Brenda is known for her hilarious antics whether she is cheerleading for Toastmasters events or telling a colorful story about her life.  She is a stickler for details and protocol and can decorate for any event anytime, anywhere.

Because of their leadership, Afterburners enjoys a wonderful reputation of being a President’s Distinguished Club for over 16 years in a row now.  And for President Setma Maddox, this year ended on a high note as we achieved 10 out of 10 goals on our Distinguished Club Program!

For the last meeting of the year, Setma, past president of Afterburners and incoming Division A Director, hosted a wonderful reception for Brenda Daniels and Tom Brents for their 30 years’ service in the Afterburners Club.  As usual, President Setma Maddox outdid herself as she presented both honorees with a beautiful plaque that had a golden gavel.  There was a delicious cake along with different entrees and desserts brought by Afterburners members.

It was a mixture of a toast and a roast and filled with many jokes and pokes, but the underlying sentiment from everyone was the powerful impact both these leaders have made in our lives.