He joined Toastmasters in June of 1986 and was an incredible mentor for members, clubs, and district officers. Jim was an active, vibrant member of the “world-renowned” Grand Prairie Toastmasters Club since it chartered in 1986. He was always willing to help where needed.

The 1994-1995 Toastmaster year was the year that District 50 split from District 25.  Jim worked with Ron Smith the District Governor at that time to draft the bylaws for our District. He also served District 25 since 1995 as our Parliamentarian. I was very impressed by Jim’s dedication and commitment to the District position that he held for over 18 years. At the Awards Banquet in 2012, his dedication was recognized by the District. 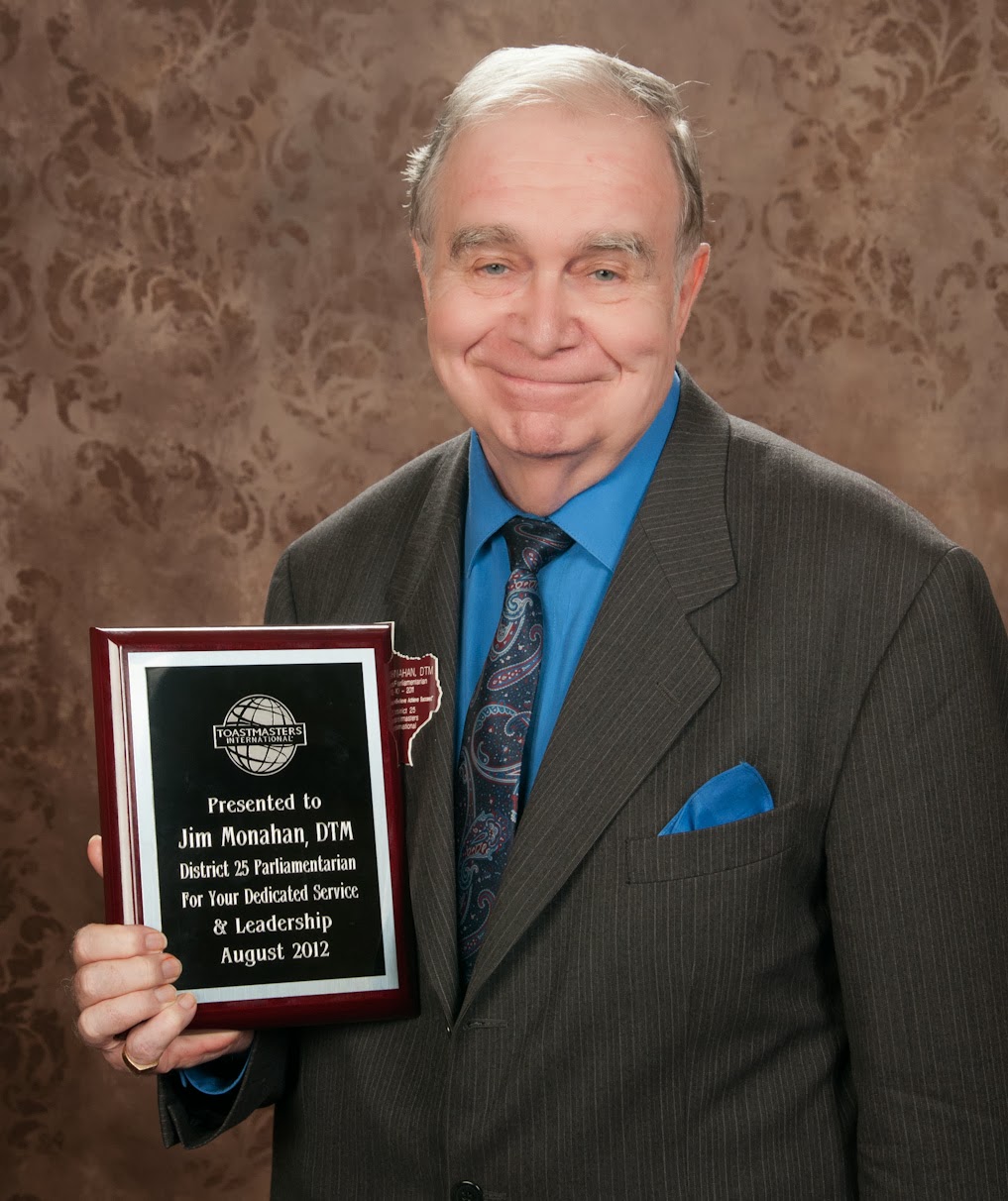 He was still active, learning and growing and actually received another DTM in June 2013. He was helping others learn parliamentary procedures right up until the end.

It is hard for me to find the words to express how much I appreciated his help to me personally during my year as District Governor.

The business meetings were one of the scariest things for me when considering accepting the role as District Governor and Jim was there by my side as Parliamentarian, literally, making sure I didn’t faint. His presence was calming and reassuring.

He set an outstanding example to each of us as members and leaders of our clubs and district.
Diana Patton, DTM
D25 Past District Governor 2011-2012

Jim was one of the most caring and knowledgeable people I have been fortunate enough to know. A true gentlemen in every sense of the word, Jim served as my District Parliamentarian during my term as District Governor in 1996. He is a legend and remained a great source of council and a valuable resource in District business matters. His staunch sense of humor and vast knowledge leaves a difficult to fill void.
You will be sorely missed.
Respectfully,
Dr. Jeff Johnson, DTM
D25 Past District Governor 1996-1997

Jim was the only person on my short-list for District Parliamentarian when I served as District 25 Governor in 2008-2009 and it was comforting to have my dear friend and mentor by my side during the district business meetings. But, he was much more than my choice for District Parliamentarian. He was a true friend even before I dreamed of being a District Governor. I learned a lot from Jim from the time I met him at Grand Prairie Toastmaster Club around 2002. He was always willing to give honest, straightforward, and useful advice. I call him the patriarch of the World Renowned Grand Prairie Toastmasters Club. He was always the same wherever you saw him.
I will miss him dearly.
Peggy Holloway May, DTM
D25 Past District Governor 2008-2009

What I remember and appreciate most about Jim was his generosity – his willingness to share his knowledge and wisdom with others. He was always positive and encouraging. He made me feel at home when I went to visit  the world-renowned Grand Prairie Toastmasters Club. He treated everyone – from the most Distinguished Toastmasters to the newest of members – with respect and kindness. He held himself to the highest standards of excellence and was a man of absolute integrity and sterling character. He was one of the finest role models and ambassadors for Toastmasters that I have ever met. The members of District 25 are blessed to have worked with and learned from “a giant”.
God bless you Jim.
Dave Himmelstein, DTM
D25 Past District Governor 2005-2006

I’m forever grateful for Jim’s willingness to help me shine during my term as District Governor; and I will always remember his friendship and unwavering dedication to serve the members of District 25.
Ron Bland, DTM
D25 Past District Governor 2001-2002

Jim Monahan is a parliamentarian extraordinaire. He sits quietly near the District Governor during the business meeting at each district conference paying close attention to what is going on to be sure each item is discussed and voted on by the rules of parliamentary procedure. Sometimes he does not have to say a word in a meeting to get his job done. Sometimes he has to explain the process several times during the course of a business meeting. Jim explains the motion and discussion process to the participants in the business meeting in a professional manner and a manner that is well understood by all.
I would call Jim a “gentleman and a scholar.”
Earl Hill, DTM
D25 Past District Governor 2006-2007

Jim Monahan epitomized steadfastness, reliability and a quiet strength, during his many years of service to District Toastmasters.
Maurice Taitt, DTM
D25 Past District Governor 2007-2008

Jim was always a wealth of parliamentary and Toastmasters knowledge and a solid rock to lean on especially during District Council meetings.
David Martin, DTM
D25 Past District Governor 2010-2011