Home / Good Advice / Leaders Encouraging Leaders
January 16, 2017December 4, 2017
in Good Advice, Leadership, Testimonials
As the deadline for elected officer nominations approaches, Past District Governor and recipient of the Toastmasters International Presidential Citation, Diana Patton, DTM wishes to encourage those individuals who may be on the fence about running for an elected office in the district.
Diana, why did you run for elected office?
‘Someone that I respected as a leader encouraged me to run for elected office.  Because someone believed in me, it made me believe in myself.  I never imagined I would even consider the top three District roles.  One statement she said to me was “District 25 deserves strong leaders.”   I knew I would give it my all if I was elected and had a strong support system.’
What did you gain from that experience?
‘The District’s focus was “Let It Shine!” during my year as District Governor.  Seeing the light of so many members on my team and throughout the district was one of the most rewarding things I’ve ever been a part of.  I loved building relationships and teams to support clubs.  It is all about the members and working the program.’
What would you say to someone considering applying?
‘Have you built leadership skills and knowledge of the Toastmasters program?  Do you have the time and willingness to commit to fill these roles?  Then do it!  District 25 members need great leaders. You can do it.’ 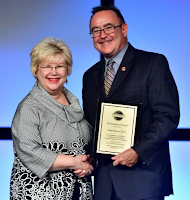