An Evening of Possibilities – An Evening to Remember

The Awards Banquet Committee was ready and waiting for 5:30 for the doors to open; standing by to meet and greet Toastmasters and guests.  Had we forgotten anything?  Surely not, we had been planning this a long time.

We had the best.  Jon Strickland for sound, Michael Sheridan for the slide presentations and Bill Erwin had assisted in the overall setup.  Bonne Stroman and Libby Wiley worked on the decorations with the help of many.  Tisha Randle had volunteers lined up.  Bonne Stroman and Lindsay Dillard worked on our lectern book and MXM (minute by minute) that tells all of us what to do.  Diana Patton and myself, Mary Walker, worked on the program.

The doors were open and Larry Nickerson was at the registration table signing in our guests.  This is not an easy task as Toastmasters were calling late yesterday trying to get a ticket.  It is hard to tell a Toastmaster that we are full, registration is closed.  Early registration helped put club members at the same table. 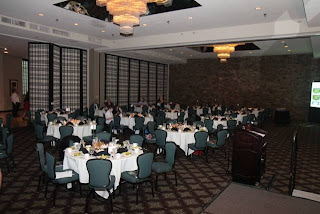 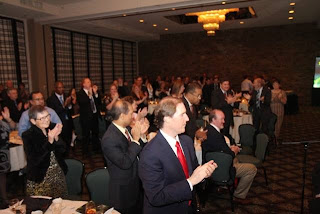 Then we had Mark Novak and Steve Bomar taking pictures for our Evening of Possibilities.  Take a look at the website of Bomar Photography to view the pictures taken by Steve.

As Awards Banquet Chair, I opened the meeting and our Distinguished Toastmaster, Diana Patton, was our emcee for the evening.  Diana led us through the program with member and club awards.  There were lots of ups and downs by our members as we recognized them for their accomplishments.  Cindy Warmbrodt, our District 25 Vana, showed ribbons as the members and clubs were recognized.

We can’t have an Awards Banquet without a Roast.  Dean Lampman and Diana Patton made a great presentation to honor our District Governor Bonne Stroman for 2012-2013.  We have decided that Bonne does not mind dressing up in costumes and loves hats.

Then, Bonne presented the special awards of the evening:

What a great way to recognize our members that do such an outstanding job for our district.

The meeting was adjourned and again the conference committee members stepped in to pack the centerpieces away and clean up, getting ready to start the journey home and think about the evening.  It was great having you there.  If you missed it, we all hope to see you at the 2013-2014 awards banquet.

If you attended the Awards Banquet, please take a few moments to fill out the SURVEY so we can keep improving it.