Dyess Toastmasters of Abilene, TX has had many of their members deploy. Their club presently has an extension meeting in Bagram, Afghanistan.

We keep the same format as a Dyess TMs meeting.

Since we only had three paying TMs members here we have allowed guests to provide an “unofficial” icebreaker to build rapport. TM Nelson has joined TM here and presented his Ice Breaker as well and is preparing his 2nd project.

We have had  many guest speakers, including Chief Boseman the 455th EAMXS Superintendent who spoke about the Career “AED” he careers and Chief Woods the 455th EMXG Superintendent that spoke about “Dignity and Respect.” We have Chief Phan planned as our next guest speaker with the “Reason I Serve” theme. We had our Officer in Charge 1st Lt King speak about his “5 pillars of Resilience” and I’ve also spoken about “My Personal Motivations,” as a speech from the Competent Communicator manual.

Every meeting we’ve recognized who provided the best impromptu speech during Table Topics. So far there have been 9 meetings with a total attendance of 90+. E-3’s through E-9’s, from Air Force and Army have attended. 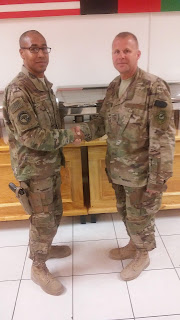 Included here is a picture of TM Jusino-Rodriguez receiving a challenge coin from a Chief Master Sergeant (the highest enlisted rank in the Air Force).

You may have noticed that TM Jusino-Rodriguez has a Beretta M9 on his hip. That is something you do not see  at many Toastmaster meetings!

Another thing I noticed was the challenge coin itself.  Integrity, Service and Excellence–all core values of Toastmasters–are there as well as Communication and Leadership.  More good stuff!

Challenge coins represent a person of rank, position, and importance. When a member receives a coin, it often signifies that the member has done something outstanding to receive it from whomever. On the coin will usually have who the person is, his or her rank, position, an original design, and a motto or mission statement from their unit. Often members will carry their favorite coin with them, every coin has a story behind it, so ask them about it.