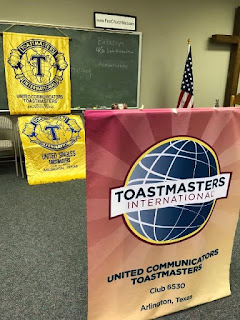 The club was honored to have current District 25 Director Jodie Sanders attend.  Past District Governor Diana Patton also attended and took the pictures shown with this article.  Thank you, Jodie and Diana for your support.
The decorations featured a pearl theme.  The pearl is a symbol for a 30thanniversary.  The club scrapbook and other historical items were displayed.
Club 6530 was chartered in April 1987 as United Singles Toastmasters.  In January 2005, the club became an open club and adopted its current name.
Sean Hayward did an excellent job as Toastmaster.  Current President Hester Schwarzer recognized the past Presidents of the club who were present.  Two new members were formally inducted into the club.
Club Historian Harry Schneider distributed retrospective 30thAnniversary booklets to those in attendance.  Thanks to Harry’s wife Judy for all her help with the project.
The booklet was dedicated to George Brandsma, a charter member of the club.  George just turned 94 and was still active in United Communicators at age 85.  He served thirteen terms as club treasurer.
The booklet was in memory of Howard Meyers (1951-2001.)  Howard won the District 25 Tall Tales Contest in 1992.  He was the first club member to participate in a District-level contest and the first member to win a District-level contest.
Among its achievements, United Communicators members have served District 25 as Secretary, Treasurer, Audit Chair, and Realignment Chair.  Fourteen times club members were named Outstanding Officers for District 25.  Club members have won District-level contests four times.
United Communicators Toastmasters meets every Tuesday at 7:15pm in Room 257 of the First United Methodist Church in Arlington, 313 N. Center St., Arlington, Texas 76011.  Please come and
visit us! 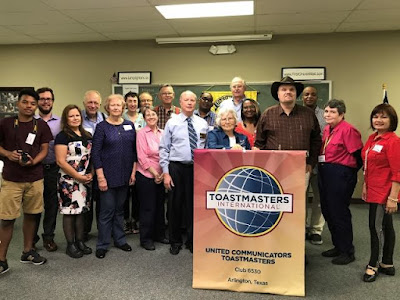