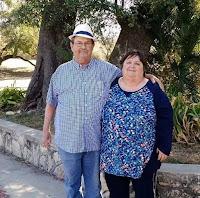 Our friend and fellow Toastmaster, Richard Patton, ACB, CL, passed away on Friday May 13, 2016 at the age of 62.  He served as a firefighter and even worked his way up to Battalion Chief in the U.S. Air Force.  He became a member of Toastmasters in June of 2013.  Those of us who knew him found his sense of humor, strong will, and gentleness endearing.  His health issues were challenging and I was impressed by his optimistic attitude and strength in the face of obstacles.  I was also inspired by the love between him and his wife, Levona (pictured above).  Their dedication to each other is something that I hope to one day emulate.  Fellow Toastmasters in Afterburners Club also want to pay homage to his memory: 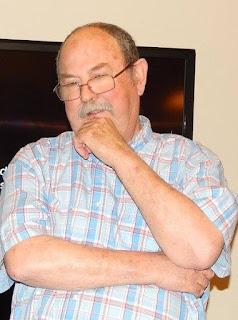 Richard was quite the Toastmaster Character”.  We never knew exactly what to expect when he gave a speech.  He always spoke from the heart and brought his special brand of humor to any topic.  As the Afterburners’ VP Membership, his first concern was that all new members received the proper orientation and were made to feel special.  His personal attention ensured they had an excellent start to their Afterburners experience.  He was an asset to our Club and is missed at every meeting.
RIP Richard!
-Brenda Daniels, DTM

Richard Patton was a real asset to our club.  His humor was always present in his speeches.  He brought us the New Member Orientation which had been missing for a long time.  While he had many health problems, he was always matter-of-fact about them and there was never any bid of sympathy.
-Tom Brents, DTM

Richard was an authentic person.  He was kind, he was funny, and he had lots of interesting life experiences to share.
– Bill Erwin, CC, CL

Richard Patton was a nice man who loved his Afterburners Toastmasters Club.  He made every effort to be at our Tuesday night meetings.  He loved his military service for his county and he shared many stories with us from his time in the military.  He was a brave man who despite his many medical issues, still had so much energy, enjoyed his life and activities, and smiled at people every minute of every day.
– Holly Trinh, ACG, ALB

Richard was a funny and interesting man.  We loved listening to his speeches.  They were testimonies of his life.  Richard was very inspiring.  No matter how he felt, he would try to make it to the Toastmasters meeting with a smile and he would always have nice things to say.  Richard was an asset to our club.  He is truly missed.
-Antoinette Silas, CC, CL & Phillip Silas, CC, CL

Richard Patton had a unique sense of humor.  He loved to entertain our group with his real life stories.  He did an outstanding job as our VP Membership and only wanted what was best for his fellow club members.  It was an honor to know someone so willing to serve others and show how much he cared.
– Rose Timmons, DTM

With all our love,
Your Afterburners Family