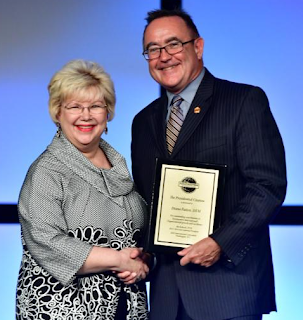 Diana Patton, DTM,PDG, accepted a Presidential Citation awarded by International President, Jim Kokocki, at the recent Toastmasters International Convention in Washington, D.C.  This citation is awarded to members who have made significant contributions of long-term value on the Club, District, and International levels. They also have shown continual support and dedication to the Toastmasters organization.

It is fitting that Diana received this recognition as she exemplifies our organization’s highest ideals.  She represents the best that Toastmasters can be by modeling the core values of our organization in all she does.