The recent Awards Banquet celebrating achievements of members and clubs in the 2014-2015 Toastmasters year was a huge success!

Over 200 people gathered at the Ridglea Country Club for dinner, networking and celebration of accomplishments.

TEAM WORK by the Awards Committee headed by Mary Walker provided ease of registration, claiming awards envelopes, and the smooth movement of the evening. A special thanks to all the committee members and to volunteers that helped facilitate the event.

Moving around the room and experiencing the friendships and kindred spirits at the various tables was heart warming.  It was an opportunity for members of different clubs to sit together to refresh old friendships or ignite new ones. Several clubs had enough attendees to fill a complete table. 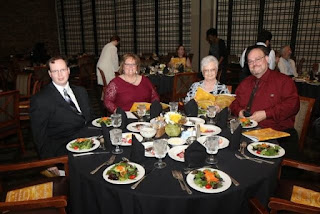 Along with recognition of the many member achievements, Past District 25 Governors present were called to the stage to thank them for their continued service to their clubs and the district. With the new district leader title (District Director), the Past District Governors are now a finite group.

Fun is always part of our celebrations, and this year’s roast of the outgoing District Governor (me) was lead by a three member “cheer team”.  They delivered the oration and had pictures projected on the big screen to support their statements. 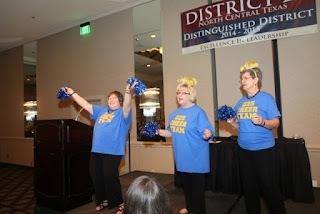 To see more pictures of the evening, please see the D25 facebook page.  There are several albums so be sure to check them all out!
https://www.facebook.com/d25toastmasters/photos_stream?tab=photos_albums

It was a great year and a wonderful evening of celebration.  If you missed the event this year, be sure to attend next year’s awards banquet!

Yours in Toastmasters service,