Let me share a few special memories from the 2015 Toastmasters International Convention with everyone.

Our district was well represented this year at the convention and those present were able to share in some proud moments for District 25.

Jodie Sanders, Chuck Mencke and I spent three action-packed days in Las Vegas before the convention itself started.

On Sunday, we interviewed almost all the candidates for International office. We felt quite well-informed about the merits of each one.

On Monday and Tuesday we had two full days of district leader training. As you can see from the photo at left, we graduated! 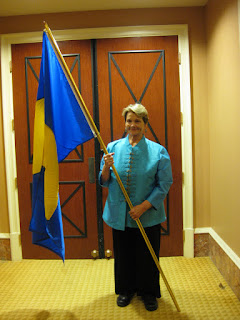 For me, a very special moment occurred during the Opening Ceremonies on Wednesday.

The convention begins with a procession of flags carried onstage. Every country where Toastmasters clubs exist is represented.

I was honored to carry the flag of the Caribbean nation of Barbados, the home country of Past District 25 Governor Maurice Taitt. I thought of Maurice often during practice and during the actual ceremony.

I was the sixth flagbearer to enter the ballroom from the curtains at the back of the stage. By the time the last flag came out, the stage was full of colorful flags. This unforgettable experience was a huge thrill for me. 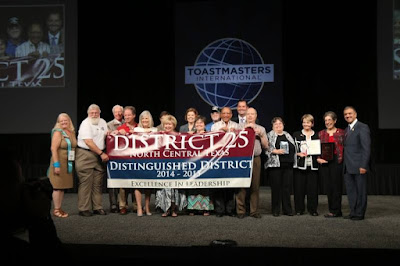 Thursday morning at the Hall of Fame, friends and fellow members of District 25 proudly carried our “Distinguished District 2014-2015” banner across the stage as Marylee Mims, Jodie Sanders and I accepted awards on behalf of each member of District 25 for their accomplishments. 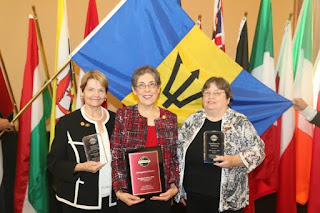 I hope to see even more of our members join us onstage in Washington D.C. for the 2016 International Convention when our members and clubs Achieve Excellence and our District reaches Distinguished status once again!