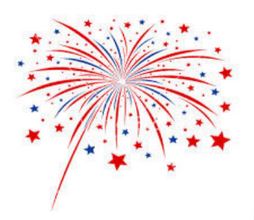 The second open house on June 30 featured a Fourth of July Celebration.  Long-time club member Bob Conrad presented a humorous history of how Grand Prairie Toastmasters became “World Renowned. “Back in the mists of time in some foggy bottom on a grand prairie, were some folks called BABBLE-onians, for they babbled on without form and no purpose of communication function. There arose from this flat, foggy prairie a man with a vision–a man with a stentorian voice and a sartorial demeanor. His name was Ron Smith; he transformed the BABBLE-onians. Ron had them join Toastmasters, and lo, the babble took form and had function . . . it had become COMMUNICATION! And Toastmasters said, ‘This was good.’ “

At the end of the June 30 Open House, three new members joined World Renowned Grand Prairie Toastmasters, bringing membership to 20 members. WRGP ended the Toastmaster year with a BANG with the club once again achieving the President’s Distinguished Club status for the 2014-2015 Toastmasters year.

See all the great photos.