Rex Davenport, a long time member of District 25 Toastmasters and Past International Director, passed away Thursday, August 29, 2013 at the age of 85.

At the 2011 International Convention Rex was presented with a Presidential Citation. Go here to read the article. 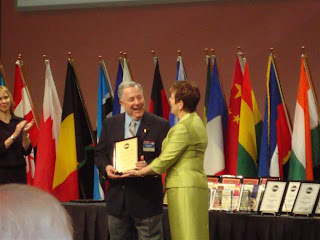 Rex was a member of  the North Texas Toastmasters Club in Denton.

With 60 years of membership in Toastmaster’s International, he was the longest living Toastmaster alive. He gave a lifetime of service to Toastmasters.

A service celebrating his life will be held on September 13, at 1 PM in Cole Chapel, First United Methodist Church, 201 S. Locust St., Denton. A light lunch will be served following the service.

In lieu of flowers, donations may be given in his memory to the building expansion program of Good Samaritan Denton Village in care of Anita Ray.