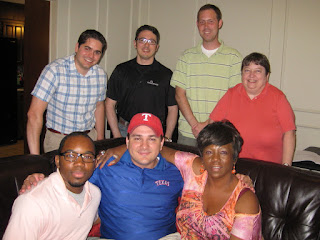 There were plenty of food and drinks on hand as members brought various dishes along to complement David’s grilled goods. Rachele Williams’ baked beans and bacon was a particularly tasty treat.

After everyone arrived and had time to enjoy some food, the speaking began. The event was split into two parts where one person served as Toastmaster, four members delivered speeches, four evaluated speeches, and there were roles for ah-counter and timekeeper. After the first round, everyone switched roles. Each member spoke, evaluated a speech, and served a meeting role. A random drawing determined the speaking order and roles for each participant. There was even an opportunity for Table Topics between the two sessions. Jamil’s wife Jessica even participated in the Table Topics that night and did a spectacular job!

Daniel Valdez delivered a particularly moving speech about pursuing one’s goals and not giving up. He referenced Derek Redmond’s emotional injury during the 1992 Olympics where he and his father hobbled across the finish-line in last place to a standing ovation by the crowd. David Curtis delivered a solid speech on what Toastmasters has done for him. Jodie Sanders told a wonderful story about coaching a floundering Toastmasters club from near-collapse to one that is thriving. Rachele Williams roasted an effigy of her husband and told a great joke in the process! Jamil Glenn delivered a cheerful toast to the host of the evening, David Curtis. Nathaniel Teeter spoke about what inspires us and how it differs from person to person. Travis Farral gave an inspirational speech on success and what it truly means.

Daniel Valdez was the first Toastmaster, new member Nathaniel Teeter was Toastmaster for the second half and Jodie Sanders had the privilege of being Table Topicsmaster.

All participants agreed the event was a resounding success and look forward to the next Speak-a-Thon!