Division F Contest Is Where the Gnomes Roam from Home 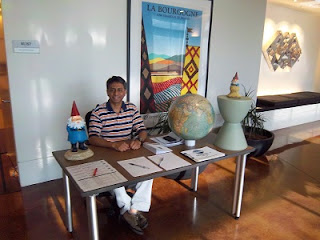 At the recent Division F International Speech and Table Topics Contest, attendees were welcomed by a band of roaming Gnomes! The contest was held at Sabre Headquarters on May 19, and it is a great example of the community coming together to have fun with Toastmasters. Sabre has a  long tradition of supporting Toastmasters, and the company sponsors two clubs that meet at their headquarters: Sabre Classic and Speak With Success. 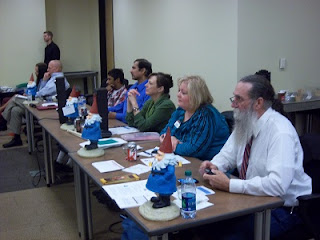 The Division contest proved to be a wonderful event this year that offered the Sabre community a chance to learn about Toastmasters and gave the contest attendees the chance to meet many of the famous Travelocity Gnomes in person! Members from the Sabre clubs  joined forces to make the event really fun and special.

This year’s contest co-chairs were members of the Sabre Classic Toastmasters Club. As Sally Czerwinski and Joshua Bright began meeting and planning the event with District F Governor, Kathy Brewer, they knew they wanted to involve lots of Sabre Toastmasters and they wanted to plan the event so that it would be memorable.

As the contest neared, it was time to start finalizing the plans. The entire team got really excited at a meeting that was held just a few weeks before the contest. The Co-chairs challenged the team to come up with some special decoration ideas. Sabre Classic member Mathew Valastro  suggested using the Travelocity Roaming Gnome as the main theme for the decorations. Everyone immediately agreed it was perfect!  Mathew then started investigating how he could come up with enough Gnomes to make the venue for the Contest perfect. Mathew’s approach was that “no place should be left gnome-less.”  Since the Contest did not have a budget that could allow for  purchasing Gnomes for the occasion, Mathew came up with the idea of “borrowing” the Gnomes from  Sabre and Travelocity employees who owned a Gnome! 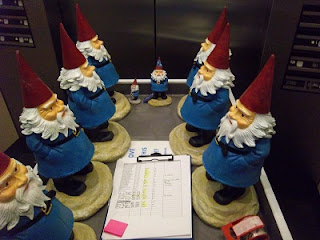 Mathew formed the Roam Your Gnome committee and got started with the campaign! He had to secure permission from Travelocity and the Sabre Legal Department first. He then created a flyer and also sent out lots of emails with links to a special SharePoint site he created where interested employees could sign up and allow their Gnome to Roam for the Day. The site even had an area that owners could use to provide special instructions for the Gnomes! Watching the site and the list of Gnomes offered up was fun for all. We got hilarious special instructions for each Gnome from their owners. Some of the instructions were: 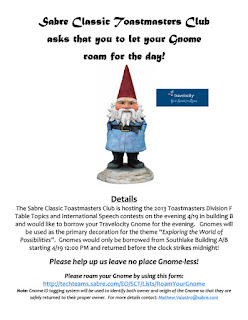 The SharePoint site also had radio buttons where you could learn more about Toastmasters and view the flyer about Roaming Your Gnome.  The Gnome decorations proved to be a big hit at the contest!  Toastmasters from around the Area and District had the chance to see how much fun the Roaming Gnome team and the Sabre clubs had in supporting the contest.  And it gave the Sabre/Travelocity community a chance to learn more about Toastmasters and the opportunities available for personal growth and development. Definitely a WIN-WIN marketing situation, this Roaming Gnome Campaign was a highlight of the Division F Contest! Much credit goes to Mathew Valastro, the chief architect and inspiration for the idea.

Previous Post LinkAre You Up For the Club Charter Challenge?Next Post LinkTXU Energy Executives Go for the Golden Toaster in Speaker Showdown