Wow!  Did everybody “Boldly Go!” to the Spring Conference Friday Night Costume Contest!

Before we knew it, Admiral Kirk (a lifelong dream for Bret) was dressed.  I put all the Queen Bling on I could find (hey, I have my dreams too!) and it is time for the contest! 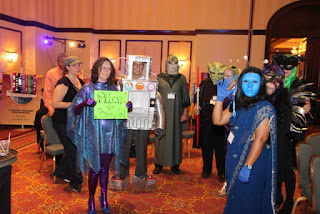 We saw fellow Toastmasters ready for battle, prepared to serve on the Enterprise, and some were, well, just ready! Imaginations and creativity was at its best! The costumes were just great! 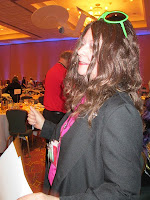 The music was so fun and the dancing began! The aliens were rocking and everyone joined in. There were moves on that stage that were out of this world! From the stage to the back doors, there was laughter! With over thirty contestants, the competition was tough! The judges had their work cut out for them.

After much deliberation and audience applause, the winners were announced:

Previous Post LinkForty-Nine First Timers Have a Fantastic TimeNext Post LinkTakeaway from Conference: What People Thought About Their Experiences