A Review of the New Rules for Speech Contests 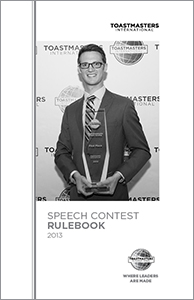 Toastmasters International recently released the 2013 Speech Contest Rulebook. While many of the changes are merely clarifications or rewording, a few changes warrant your attention.

First, contest functionaries may no longer compete in a contest at which they serve as a functionary. Previously, this was primarily directed towards the Contest Chair. However, those serving a contest in another capacity such as food chair, awards chair, etc., should no longer plan to compete in that contest.

Second, 25 percent or less of the speech may be devoted to quoting, paraphrasing or referencing another person’s content. Previously, a speech had to be substantially original, which was subject to interpretation. The new rule further confines that substantial measure to 25 percent of the speech content and applies to “paraphrasing” or “referencing” as well as “quoting.” If you compete, you should note that any such material you use must be so identified during the speech presentation. 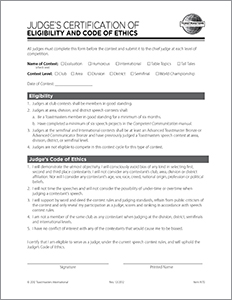 Before each contest, judges should complete, sign and hand to the Chief Judge a Judge’s Certification of Eligibility and Code of Ethics. Former contestants are likely familiar with a similar form that they have completed as speakers. This type of form will now apply to judges, too.

As always, judges should stay anonymous at all contest levels as much as is practical.

Acknowledgement: Thanks to former District Chief Judge Susanne Nickerson for her assistance in reviewing the rule changes and their impact for our contestants and judges during the upcoming contest season.

Previous Post LinkThree Ways to Open House SuccessNext Post LinkFind Out What Happens at That “Off the Cuff” Club!