Home / Conferences / 2012 Fall Conference / District Conference through “Green” Eyes
November 18, 2012December 4, 2017
in 2012 Fall Conference
First off, my eyes are actually blue.  However I was definitely “green around the ears” walking into the Grand Ballroom at the Sheraton Friday evening. It was your usual organized mayhem for anyone who doesn’t know where to go or what to do. But this isn’t just any professional conference. This was a Toastmaster District Conference which means anyone who was wearing a name badge was an enthusiastic source of information for you to use.
I really don’t think you can be a wallflower at this event. Encouragement and inclusion are not at a premium, they are in abundance. Instantly you feel comfortable and relaxed. I could go into so many anecdotes of the weekend. One I will share with you at the end, but there was a much larger epiphany that went on this weekend.
Meeting John Lau, the International President of Toastmasters was a great event. We place a very large amount of importance on him and his position. I have no doubt that he has earned that right and the designation he is given. When you meet him though, you realize that he places even more importance on you than you could ever put on him. This is the essence of Toastmasters. I felt like I was talking to a member of my club and believe me, if he ever wants to move to Fort Worth TX, Top Notch Toastmasters will always have the door open for him. 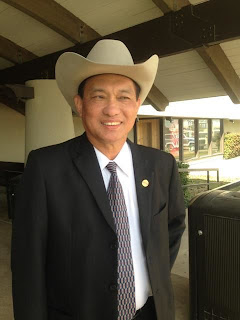 That is when the epiphany hit. He is a member of “my club”. The values of Toastmasters must be consistent no matter what level they are operating on and he is a living, breathing, quintessential example of this. He does this for his home club, his area, his district, his country, and for all of us, past, present and most importantly, future members of Toastmasters. If I learned just one thing at this conference, it was that this is not an example to just admire – it is one to follow.
One quick antecdote though.  At breakfast Saturday morning I had the pleasure of sitting down at a table and meeting DJ. Like me, he was a first timer and we had the same nervous excitement surrounding us about the day’s events (or so I thought). We went to our own choices of workshops, and then we met back at the same table for lunch as well. The conversation was great, it was nice to meet a new friend outside of my club in Toastmasters. Later that afternoon I came back to see the Humorous Speech Contest, and DJ was dressed differently. Then his name was called and he was up on stage – speaker #1 for the contest. He did an awesome job. So awesome of a job that he is now the reigning Humorous Speech champion for District 25. So when you go to this conference, you get to speak, converse, and befriend champions. 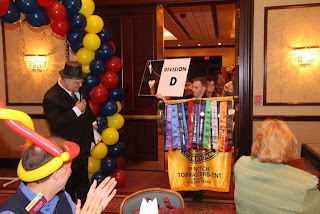 Second epiphany? We are all champions in Toastmasters whether we just finished our first speech or have gotten our DTM mulitple times. So, don’t deny yourself the chance to be around other champions for a weekend.

If you didn’t attend this conference, or even if you did, be sure to sign up to be at the Spring Conference. It is May 3rd and 4th, Make it a personal goal. Take whatever steps you need to over the next few months to achieve that goal. If you do, you can have a seat at my table for dinner. It is the table where champions sit.
James Cosgrove  TM
Secretary Club 825
Top Notch Toastmasters
Previous Post LinkTNT is to Show SPEAKNext Post LinkDistrict’s Outstanding Officers Are Announced at Fall Conference