Home / Club Events / Club 420 is Ten!
November 15, 2012December 4, 2017
in Club Events
North Texas Toastmasters, Club 420, hosted its 10th Anniversary Celebration on November 5, in Marquis Hall room 118 on the campus of the University of North Texas.
Club president Tracee Robertson presided as the Toastmaster. The Anniversary theme was “Why I am a Toastmaster, Then and Now.” Toastmaster Robertson began by announcing that the North Texas club has already achieved Distinguished Club status, to be recognized in June 2013, and is well on its way to achieving even greater excellence.
Toastmaster Robertson recognized the two dignitaries present:Diana Patton, past Governor of District 25 and current District treasurer, along with Area 52 Governor Lindsay Dillard, who delivered congratulatory remarks to the capacity filled room. The founder of the North Texas club, Dr. Russell Elleven was unable to attend but sent word also congratulating the club on such a great milestone.
The invigorating meeting was kicked off by Russ Stukel, Advanced Communicator, reading a light-hearted piece entitled the “Mysterious Little Word Up.” Brand new NT Toastmaster Benjamin George delivered a phenomenal ice breaker speech entitled, “A Glimpse.”
Mr. George’s speech was followed by Distinguished Toastmaster Rex Davenport’s speech, “I am an Asterisknot, ”demonstrating why he continues in Toastmasters, and regaling everyone with his views on the people, the leadership opportunities, and most importantly, the fun he’s had since joining in 1952! Mr. Davenport holds the distinction of being the Toastmaster with the longest membership in this prestigious international organization.
Table Topics on Toastmastering were provided by Competent Communicator and current club treasurer, Jeffrey Levy. Participating were Distinguished Toastmasters Helen Schenk and Yvonne Davenport, giving knockout praise for the organization, and guest Michaela Beavers, entertaining everyone with her newcomer’s perspective.  The Table Topic portion of the meeting let multiple participants practice impromptu idea development and presentation. 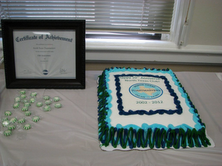 At the conclusion of the meeting, many photos were taken while everyone enjoyed the balloon-accentuated festivities with door prizes, sandwiches, a special anniversary cake, and beverages.  While this meeting was a special celebration, the North Texas Toastmasters Club is open to all.  The club meetings occur every Monday from 12pm-1pm in Marquis Hall, room 118, at the University of North Texas, provided the campus is open.  The public is encouraged to visit and can visit as many times as they wish.
Submitted by Jeffrey Levy and the members of the North Texas Toastmasters Club,
http://420.toastmastersclubs.org/
Previous Post LinkLocal Toastmaster To Be on RadioNext Post LinkHow To Attract Members