Top Notch Toastmasters held their club contest on Wednesday, September 13th at Julie’s Fresh Kitchen, where the club regularly meets. Out of the nine contestants (four in evaluation and five in humorous) only two had been with TNT for more than eight months.  In fact, one of the humorous contestants, James Walker ( second from right) gave his ice breaker that night as a contestant! 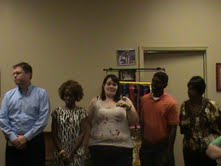 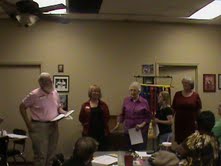 The Evaulation contestants are pictured with Toastmaster for the evening Chuck Mencke, DTM, the Division D Governor. Left to right they are Karen Powers, Carlene Dennis, Karen Cosby and Frankie Rike, who will represent TNT at the Area Contest.