We will also honor those who made their D25 Elite and Star goals, those who achieved goals in communication and leadership, and recognize some members of our District 25 family which you have voted as being outstanding. This is also our time to honor our Immediate Past District Governor Diana Patton and recognize her leadership in making District 25 a Distinguished District.

What better place to recognize Diana Patton than the Ashton Depot? Diana and her husband Bob worked and retired from the BNSF Railway. Registration is now available on www.d25toastmasters.org website. Register by August 10th for a cost of $30 per person. After this date the cost will be $35 per person. 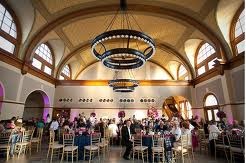 This is an opportunity for you to view the Ashton Depot, located at 1501 Jones Street, Fort Worth,Texas 76102. In 1938 the depot was renovated and modernized as part of an extensive program undertaken by the Fort Worth Union Passenger Station and the Santa Fe Railroad. The station served several lines until 1960, when the Santa Fe became the sole railroad using the facility, the building was thus renamed the Santa Fe Depot. Amtrak operated passenger rail service out of the station between 1973 and 1995. Additionally, the Santa Fe Depot was listed both in the National Register of Historic Places and designated as a Recorded Texas Historic Landmark in 1970.Today, the neoclassical Beaux Arts-Style terminal has been restored to its original beauty and distinctiveness. The original stained glass windows, barrel-vaulted ceilings, and marble floors are stunning, emanating an atmosphere of effortless style and grace. Although the name of the architect remains a mystery, it is known that the structure was built by the contracting firm of Smith and Bardon during the late 1800’s at an approximate cost of $50,000.

So, sign up to be entertained in a historic building and applaud District 25 Toastmasters as we make some history as well. It will be an evening you won’t soon forget.