The mission of the club is focused on “every individual member” and “self-confidence and personal growth.”  While club officers can, and should, be aware of each individual member’s goals and progress towards those goals, it is impractical for district leaders to do so. The Distinguished Club Program provides an important tool for evaluating the health of a Toastmasters club. Note that the objective is for the individual members to achieve their goals and so experience personal growth; the Distinguished Club Program should not be considered as an end in itself.

For purposes of the DCP, the Toastmasters year runs from July 1 of one year through June 30 of the next year. Since, at this writing, it is mid-June, this means that whether your club is Distinguished for this year is probably already known. You might be in a club that is not yet Distinguished, and still be able to become Distinguished before the end of this month (and I wish you success in doing so), but for most clubs it is already clear what their DCP status will be.

On the other hand, as of July 1, every club will be in the same position: zero DCP goals achieved. Every club should have completed half of the requirements for goal number10 by submitting the list of club officers for the next term by June 30, and perhaps half of goal number nine if at least four officers (or, more precisely, individuals holding a total of at least four offices, since one officer might hold more than one office) attend training during June, but no club starts the Toastmasters year Distinguished.

Believe me when I say that you do not want to be scrambling for DCP goals in June. That can result in speeches given hurriedly, without adequate preparation, and that is not what we want. The speaker, the other members of the club in attendance, and guests (potential members) will all feel disappointed by a speech given just to achieve a club goal. 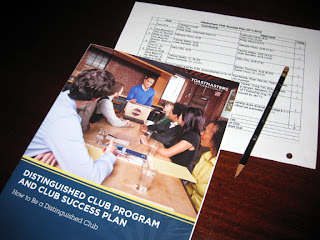 Instead, begin now to plan for your club’s – i.e., your members’ – success. Look at the Club Success Plan brochure, and ask yourself and the other members of your club to commit to personal goals, such as completing the requirements for an educational award during the 2012-2013 Toastmasters year (or even five or six speeches this term and complete the requirements during the 2013-2014 year; it would not hurt to look a little farther ahead), sponsoring new members, and attending training.

On the D25 Club Resources page you will find the DCP Worksheet form that Las Colinas Communicators will be using to track our progress. It has the virtue of fitting on one page, and it also tracks not only the Distinguished Club Program goals, but also the additional awards for exceeding the DCP goals: Pacesetter awards for education, leadership and marketing, and Super Seven awards for having all seven officers trained.

When a member achieves an educational goal, enter that person’s name in the fourth column (“actual”) and the date in the fifth column. Enter the names in the “actual” column in chronological order; it is not necessary that the awards be achieved in the order in which the names appear in the “planned” column. When a new member joins the name of the new member goes in the “actual” column.

You can print the form and pass it around at your club’s meetings. You can post it on your website (it should be in the “members only” section). You can e-mail it to your members.

And do not forget that helping to prepare a Club Success Plan (for which this form can be used) is one of the requirements for the Advanced Leader Bronze award.