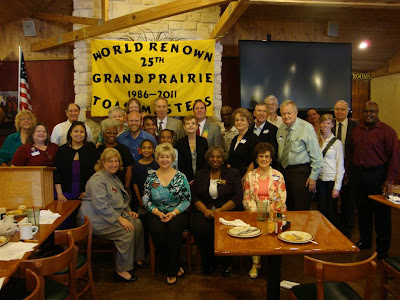 The “World  Renowned” Grand Prairie Club #6332 celebrated its 25th year of existence recently with a special meeting at Outlaw’s restaurant, a local favorite, on a Saturday morning.

Jim Monahan, DTM was presented a plaque by District Governor David Martin and Diana Patton, the District Governor-elect. Jim is still an active member of the Club and an original charter member. The plaque commemorated his personal 25th anniversary. Jim was the keynote speaker. 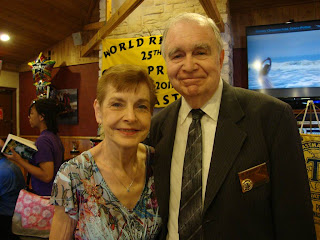 Bascom Warden, DTM reprised his District-winning Tall Tale “Oh my gosh.” Another Tall Tale by Sara Boepple, ACB/AL,  “From BABBLE-lonians to World-Renowned” was focused on our achieving World recognition for our Club category, under the old points goal system in place prior to the DCP. Leonard Malley, DTM conducted a lively Table Topics session.

Peggy Holloway, DTM delivered a technically-challenged but nevertheless highly motivational PowerPoint presentation on the 25-year history of the Club and why we deserve the “World Renowned” moniker coined by Ron Smith. 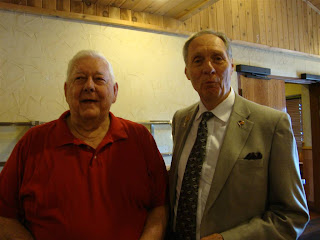 Of the 29 people in attendance, over half were original charter members, former members, dignitaries or guests.

A good time was had by all, and the Grand Prairie Club gained two new members!

5 Interesting Facts You Did Not Know about Pathways